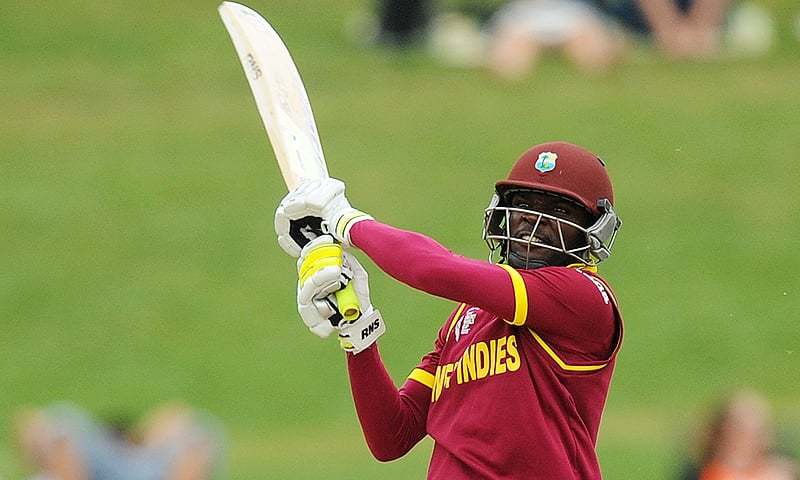 NAPIER: (Agencies )The West Indies were left on the verge of a World Cup quarter-final place after overpowering the United Arab Emirates by six wickets in their last Pool B match on Sunday.

They reached their victory target of 176 runs in just 30.3 overs in Napier.

After a laboured performance in the field in the must-win match, the West Indies picked up the intensity when batting, as the storm clouds on the fringes of Cyclone Pam edged towards McLean Park.

A washout would have ended their World Cup campaign but the weather held off and the West Indies got the win they needed.

Now they must rely on the Ireland-Pakistan match in Adelaide later on Sunday not ending in a tie or a washed-out no result.

Either of those outcomes would give both Ireland and Pakistan seven points to the West Indies’ six, with India and South Africa already having claimed two of the four quarter-final spots on offer from Pool B.

“We needed to win by a certain margin. We had to show positive intent. We knew we had to finish the game inside 36 overs and we did it.”

Charles, making his first World Cup appearance after being brought in as an injury replacement for Darren Bravo, was thrust into the starting XI at the last minute when Chris Gayle pulled out with a back injury.

But there was no sign of rustiness as he and fellow opener Dwayne Smith launched into Nasir Aziz when UAE skipper Mohammad Tauqir decided his batting hero should opening the bowling with a touch of spin.

Charles’s cavalier innings ended on 55 off 40 deliveries and Andre Russell added seven before Carter (50 not out) and Denesh Ramdin (33 not out) saw the West Indies to a comfortable victory.

Charles, who hit nine fours and two sixes, was undone when he mistimed an attempt to drive Amjad Javed and skied the ball to Krishna Chandran at mid-on.

The wicket capped a solid all-round game for Javed, who took two for 29.

He’d earlier featured in a 107-run stand with Aziz that frustrated the West Indies after the Middle East amateurs had been reduced to 46 for six.

Holder leads from the front

Gayle’s absence made the option of batting first and piling up a huge total a less attractive option for the West Indies.

Holder took the the alternative route when he chose to field first after winning the toss in the hope of bowling out the UAE cheaply.

He played his part with his best World Cup performance of four for 27 as he bowled himself out at the top of the innings.

“The ball came out really well for me at the start,” said paceman Holder.

“The pitch was a bit slow but it swung and bounced a bit for me.”

But once Holder had used up his 10 overs and UAE were on the ropes, Javed and Aziz found the middle-overs attack of Kemar Roach much to their liking.

Aziz, in only his third ODI and not required to bat in the first two, looked very accomplished as he smacked eight fours in his 60 off 86 deliveries.

Javed topped his previous best of 42 as he reached his first half-century and with Aziz he posted the equal fourth-highest partnership in the UAE’s ODI history after also making 107 with Shaiman Anwar earlier in the World Cup against Ireland.

But once Aziz and Javed were dismissed the innings folded quickly, with the last three wickets falling for eight runs.