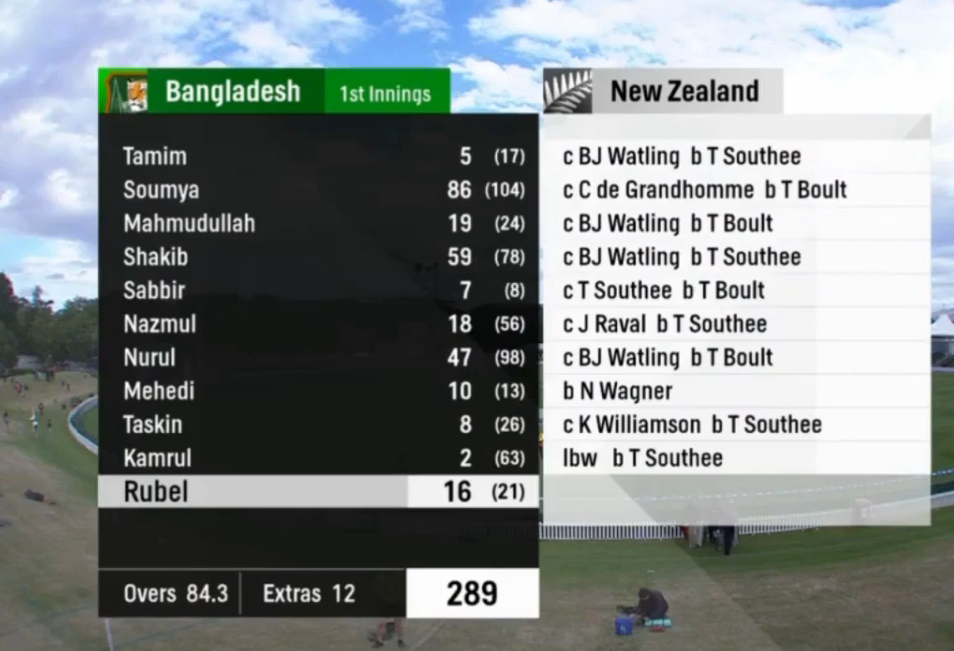 Tim Southee captured his sixth five-wicket haul in test cricket as New Zealand bowled Bangladesh out for 289 in the final five minutes of the first day of the second match at Hagley Oval in Christchurch on Friday.

Southee had Kamrul Islam trapped in front for two in the 85th over, shortly after the game had been delayed for about 10 minutes when Rubel Hossain received medical treatment after being hit on the elbow by Trent Boult.

Southee finished with figures of 5-94, while Boult backed up his new ball partner with 4-87.

Souyma Sarkar, promoted to open in a patchwork Bangladesh side who were missing batsmen Imrul Kayes and Mominul Haque and captain Mushfiqur Rahim due to injury, top scored with 86 after the visitors had been asked to bat by Kane Williamson.

Bangladesh were put under immense pressure by Southee and Boult who finally got some swing and reduced the visitors to 38 for two in the 11th over with Tamim Iqbal (five) and Mahmudullah (19) both caught by wicketkeeper BJ Watling.

The pair were not afraid to play their shots and raced through to 128 for two with numerous boundaries of the 15 the duo struck before lunch flying just wide of the hands of fielders down to the third man or fine leg fence.

Boult finally broke the 127-run partnership after lunch when Soumya was caught by Colin de Grandhomme in the slips.

As has been typical for Bangladesh on their tour of New Zealand, they lost wickets in clumps, with Sabbir Rahman (seven) and Shakib (59) falling shortly after to reduce their side to 179 for five.

Nurul Hasan, deputising for Mushfiqur, and debutant Nazmul Hossain steadied the innings and took their side through to 232 before Nazmul was caught by Jeet Raval off Southee for a patient 18.

Mehedi Hasan (10), Taskin Ahmed (eight) stayed with Nurul for as long as they could as he crept towards his first test half century, but he was the ninth wicket to fall for 47 when Watling took his fourth catch of the innings.