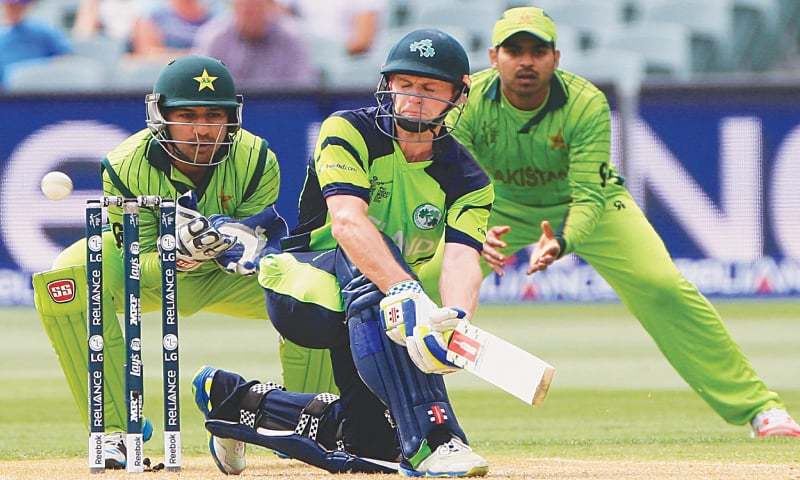 IRELAND captain William Porterfield plays a shot during his 107-run knock against Pakistan.—AP

ADELAIDE:(AFP) Ireland captain William Porterfield on Sunday questioned the International Cricket Council ICC)’s vision for the sport after the non-Test nation faced the axe from the World Cup.

Ireland lost to Pakistan by seven wickets at the Adelaide Oval in a match that lifted the winners into the quarter-final and sent the loser home.

With the ICC planning to reduce the next World Cup in England in 2019 from 14 teams to 10, Porterfield hoped it was not the end of the Irish dream in the sport.

“I’d love to think it was not our last World Cup game,” the skipper said. “Obviously it will be interesting to see what their [the ICC’s] vision for the game is.

“We need to know that and everyone wants to know that because if their vision is to grow the game, then cutting teams in world competitions will not be the right thing.

“I think the next World Cup is two or three days longer than this World Cup, so when you’ve got four fewer teams and your competition drags out longer, that’s not an excuse.”

Porterfield did not expect an immediate response from the ICC on the matter.

“I’m sure they’re hoping everything blows over the next few weeks and they don’t hear much from us,” he said. “Then it will be easy to brush it under the carpet. But I think something has to be done if they want to grow the game.”

Porterfield insisted Ireland needed to continue playing at the top level despite their first round exit — mainly due to an inferior run-rate to the West Indies.

“We’ve missed out on the quarter-finals only on run rate,” he said. “I think we’ve shown what we can do. We’ve done plenty enough. The other non-Test nations have also put on some great performances and they’ve played even less cricket than we have.”

Porterfield hoped the ICC will not ignore pleas from cricket’s greats like Sachin Tendulkar to expand the World Cup, rather than shrink it.

“If you cut us out of the World Cup then what’s the point really for us to keep going,” he said.

“A lot of people have spoken out that it is the wrong move, a lot of influential people have said that. So I don’t think the ICC can just ignore that.”