Nottinghamshire bowler Luke Fletcher was struck in the head by a ball during his side’s T20 Blast defeat by Birmingham at Edgbaston.

The 28-year-old was hit by a straight drive from Sam Hain and was bleeding but managed to walk off the pitch with the help of a physio.

He was taken to hospital and Notts later confirmed he had a concussion.

Fletcher posted a message on Twitter from hospital to thank people for their support.

Players from both sides were visibly shaken by the incident, with some in tears as the match was held up.

The match resumed after a 30-minute delay with Birmingham chasing down Notts’ total of 158 to win by six wickets.

Notts head coach Peter Moores came out to talk to his players on the pitch and the players then returned to their respective dressing rooms.

Notts and England bowler Jake Ball posted a picture on Twitter to show his team-mate was in good spirits, apparently in the back of an ambulance. 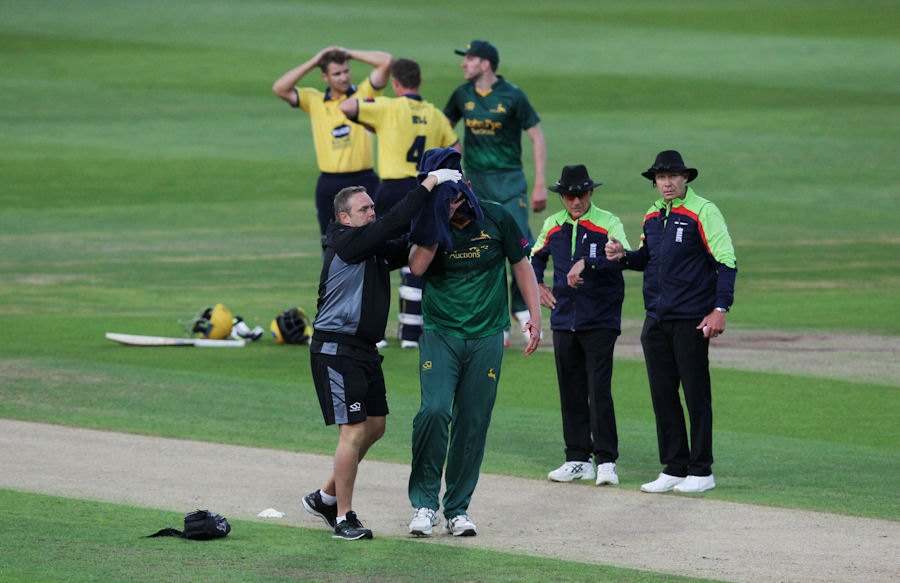 BIRMINGHAM, ENGLAND – JULY 08: Luke Fletcher of Notts Outlaws is helped off the field after being hit by the ball during the Natwest T20 Blast match between Birmingham Bears and Notts Outlaws at Edgbaston on July 8, 2017 in Birmingham, England. (Photo by Harry Hubbard/Getty Images)