British boxer Amir Khan landed in Lahore on Friday with his wife and daughter on a three to four day tour of Pakistan.
While talking to the media, he said he has brought his wife and daughter to Pakistan for the very first time and they are really happy to be here.
Amir further said that he has come to Pakistan for only three to four days but will visit the country next month for a longer tour. 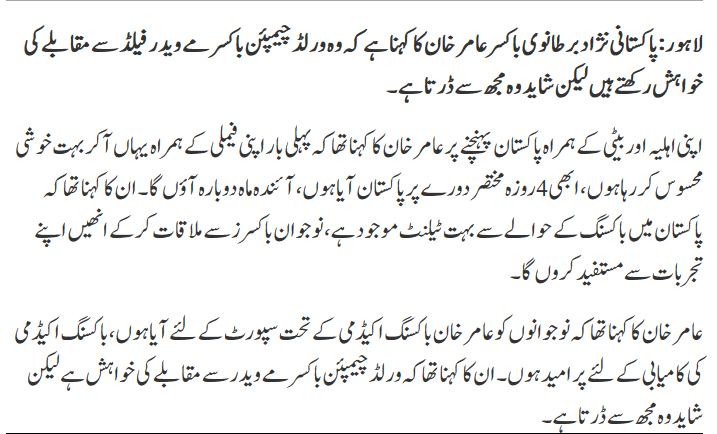 Current World Boxing Council Silver Welterweight champion said that he will meet the Pakistani boxers and also share his experiences with them.

The 28-year-old boxer said that he wants to challenge the youth of Pakistan.

He said he will also visit the Aamir Khan boxing academy which is being run under the Punjab Sports Board.

Recently, Amir Khan is trying to get a fight with pound-for-pound unbeaten boxer Floyd Maywearther Jr. Amir is optimistic that the undefeated champion will give him a chance to meet him in the ring soon.