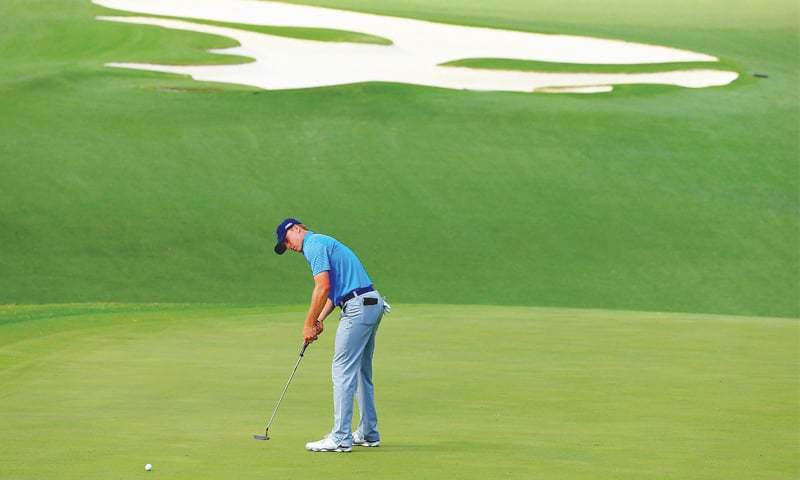 Jordan Spieth of the US putts on the tenth green during the first round of the Masters Tournament at the Augusta National Golf Club. — AFP

AUGUSTA:(AFP) Jordan Spieth produced one of the greatest rounds of golf in major history on Thursday with a 64 to lead by three strokes after the first round of the 79th Masters.

The 21-year-old Texan at one stage looked in line to become the first player to shoot below 63 in a major — a mark currently shared by 24 golfers — but a poor approach shot to the 15th led to his only bogey and nudged the record agonizingly out of his grasp.

Still, Spieth closed with a 20-footer for an ninth birdie at the last to surpass fellow young gun Rory McIlroy as the youngest player to have led the Masters after the opening round and underlined once again his huge potential.

“It’s nice to put myself in a position now where I can really stay patient, dig in and keep giving myself opportunities and not worry about anything else,” Spieth said.

“I can pretty much control my own destiny from here. And pleased to be in that position here again.

“I was leading last year at one point by a couple of shots on Sunday, it didn’t go my way.

“I know how many things can happen in a major championship and I try and learn from last year, and stay patient these next three rounds.”

The superb performance by the young Texan eclipsed the two big storylines that were the talk of Augusta at the start of the day concerning Tiger Woods and Rory McIlroy.

The 39-year-old Woods returned after two-month timeout he called on himself to try and piece back together his once dominant game.

But, after enjoying a promising buildup to the tournament, Woods once again struggled at times, especially early on, as he clattered a couple of drives into the trees, misjudged chips and then found the water of Rae’s Creek at the 13th en route to a 73.

It could have been worse for him were it not for some desperate scrambling to repair the damage done by his wayward shots.

It was a step forward for him in some ways after his woeful performances earlier this year, but it still leaves him with a fight on his hands just to make the Masters cut, something he last failed to do in 1996 when he was still an amateur.

Woods was, however, upbeat over his showing, saying that the unusually soft Augusta greens had been his main problem.

“I felt good. I felt like I hit the ball well enough to shoot three-under par,” he said.

“Our entire group was really struggling at the greens. We were talking about how slow they were today. We had a hard time hitting the putts hard enough.”

World number one McIlroy, aiming to become just the sixth man in golfing history to complete a career Grand Slam of the four majors, settled for a quiet day.

His one-under 71, which contained three birdies and two bogeys, was largely without incident and he would have been even more handily placed if not for Spieth’s late fireworks.

Still the 25-year-old, a four-time major winner, said he was content with his day’s work.

“Yeah, I just kept telling myself to be patient out there today. It was a tricky day. The wind was swirling a little bit. Pin positions were tough. Anything under par I felt was a pretty good score,” he said.

“It was nice to pick up a couple birdies on the back nine, on the par-fives there. Pretty satisfied with today’s work.”

Els, playing in his 21st Masters at the age of 45 and with two runner-up finishes to his name, rode an eagle on the 15th to record his best score at Augusta National since 2003.

He missed the cut last year after rounds of 75 and 74 that left him feeling hugely frustrated and in doubt over whether he could ever again compete for the top prize at Augusta.

“Kind of, you get fed up with yourself. Never with Augusta, you know, but yourself with the mistakes that you make,” he said.

A stroke further back from Els, Rose, Day and Hoffman and tied for six were Spaniard Sergio Garcia and American Russell Henley.

Day had threatened to match Spieth when he got to six under with two to play, but a wayward drive led to a bogey at 17 and he had to scramble for par at the last.

“I’m just happy that I got in at five-under. Still got three days left,” he said.

“Jordan’s playing phenomenal golf. That stretch of golf that he’s played over the last 11, 12 events, is just amazing. And I think everyone knows that he’s the one to beat this week.”

Defending champion Bubba Watson was solid en route to a 71 — the same as McIlroy and namesake Tom Watson, who at 65 became the oldest player in Masters history to break par.

Three-time winner Phil Mickelson was well-placed on 70 while 2012 winner Adam Scott settled for a level par 72.