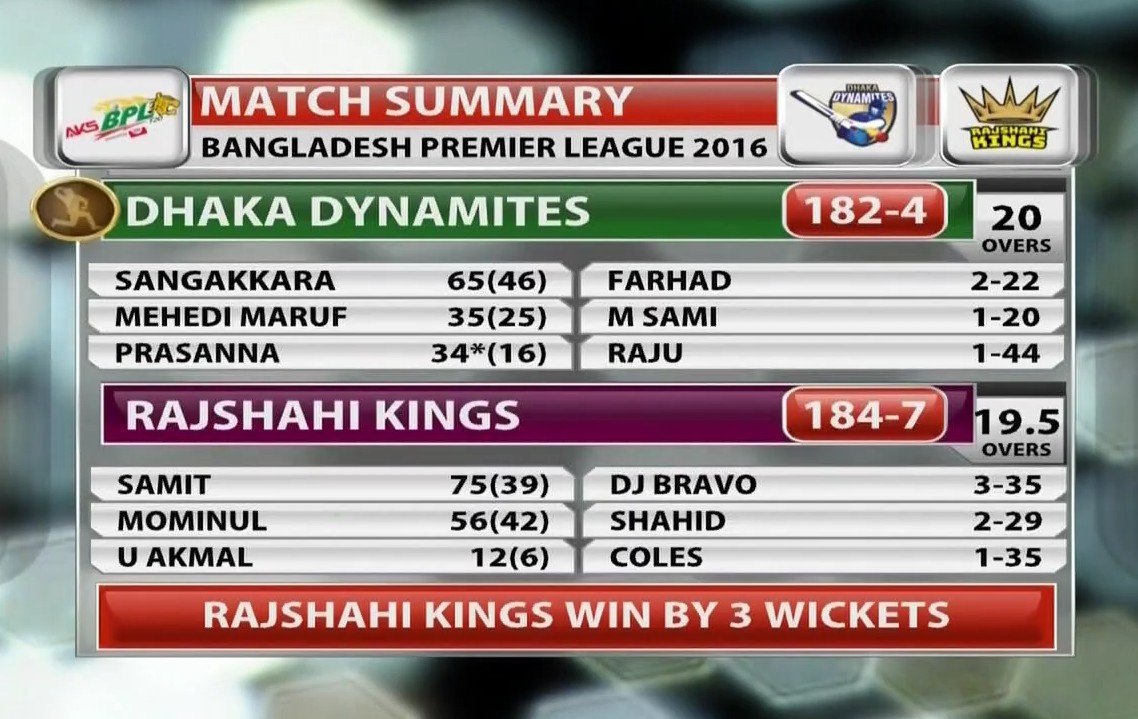 This was Rajshahi’s second win of the competition in six matches and in the process, they did the double over the capital city outfit, having won the corresponding fixture by six wickets.

It was all-rounder Samit Patel who once again shone for Rajshahi as he scored a match-winning 39-ball 75. Opening batsman Mominul Haque also chipped in with a quickfire half-century to help Rajshahi chase down their target of 183 with three wickets in hand after Dhaka posted 182/4.

However, it was anything but a straightforward victory for Rajshahi as the game went right down to the wire. Needing nine runs in their final over, Rajshahi youngster Mehedi Hasan Miraz struck a boundary off paceman Matt Coles to snatch the win from Dhaka’s grasp with only one delivery to spare.

As a result, Dhaka suffered their third defeat in seven attempts.

Chasing the target, Mominul, who smashed his third fifty of BPL 4, continued his good run of form. However, they kept losing wickets at the other end to almost lose the momentum provided by Mominul. Junaid Siddique (four) and Sabbir Rahman (seven) departed cheaply and things started to look difficult for Rajshahi until Samit walked into the middle.

Samit, alongside Mominul, added exactly 100 runs for the third wicket. The latter was dismissed after scoring 56 off 42 balls with eight fours and a six.

But Samit continued to punish the Dhaka bowlers, striking some lusty blows to bring the asking rate down. The 31-year old smashed two consecutive sixes off Shakib al Hasan but was soon dismissed while attempting a third one after making a blistering 75, featuring half a dozen sixes and five fours. Samit was instrumental in their first win of the tournament against Dhaka and he repeated the heroics yesterday to halt Dhaka’s charge.

His opening partner Mehedi Maruf added 35 while Seekkuge Prasanna remained unbeaten on a breezy 16-ball 34, composed of three sixes and a couple of fours.