DUBAI: Quetta Gladiators have confirmed their position in the play-offs of the second edition of Pakistan Super League, with an epic six-wicket win against Karachi Kings in Dubai on Thursday.

Chasing a target of 155 runs, Quetta Gladiators went off to a flying start as both the openers smashed half centuries to post opening stand of 105 runs in 12 overs.

Ahmed Shahzad scored three sixes and four boundaries to score 54 off 40 deliveries, while Asad Shafiq scored 51 off 38 with the help of one six and six boundaries.

Sarfaraz Ahmed scored 19 of 17 deliveries to complete Quetta’s win with a boundary to backwards point off Muhammad Aamir.

For Karachi Kings, Sohail Khan got two wickets, taking his tournament’s wickets tally to 11 – the most by any bowler in the second season.

Earlier, Karachi Kings was restricted to 154/6 in 20 overs after Quetta Gladiators won the toss and, keeping the tournament’s tradition going, elected to field first.

Openers Sangakkara and Babar Azam provided Karachi with a solid start of 63 runs in 7.5 overs, but following Sangakkara’s wicket the momentum slowed down, though individuals kept scorecard moving but Kings couldn’t post a big total.

Sangakkara smashed two sixes and one boundary to score 28 off 18 deliveries, while Babar Azam scored 36 off 37 deliveries.

Chris Gayle, although, managed to score some runs but couldn’t keep his traditional strike rate and scored 29 runs from 34 runs at the strike rate of 85.29 – his career’s second worst T20 strike rate when facing 30 or more deliveries.

Kieron Pollard scored some quick runs towards the end of innings by smashing one six and four boundaries to score 31 off 19 deliveries.

For Quetta, Mahmudullah from Bangladesh got three wickets, giving 21 runs from four overs. Anwar Ali took two wickets while Mir Hamza could get one wicket.

With this win, Quetta has cemented its place for the play-offs of Pakistan Super League, while Karachi struggling at the bottom with two matches remaining, and both now must win for the Kings.

For his brilliant bowling, Mahmudullah was declared the man of the match. 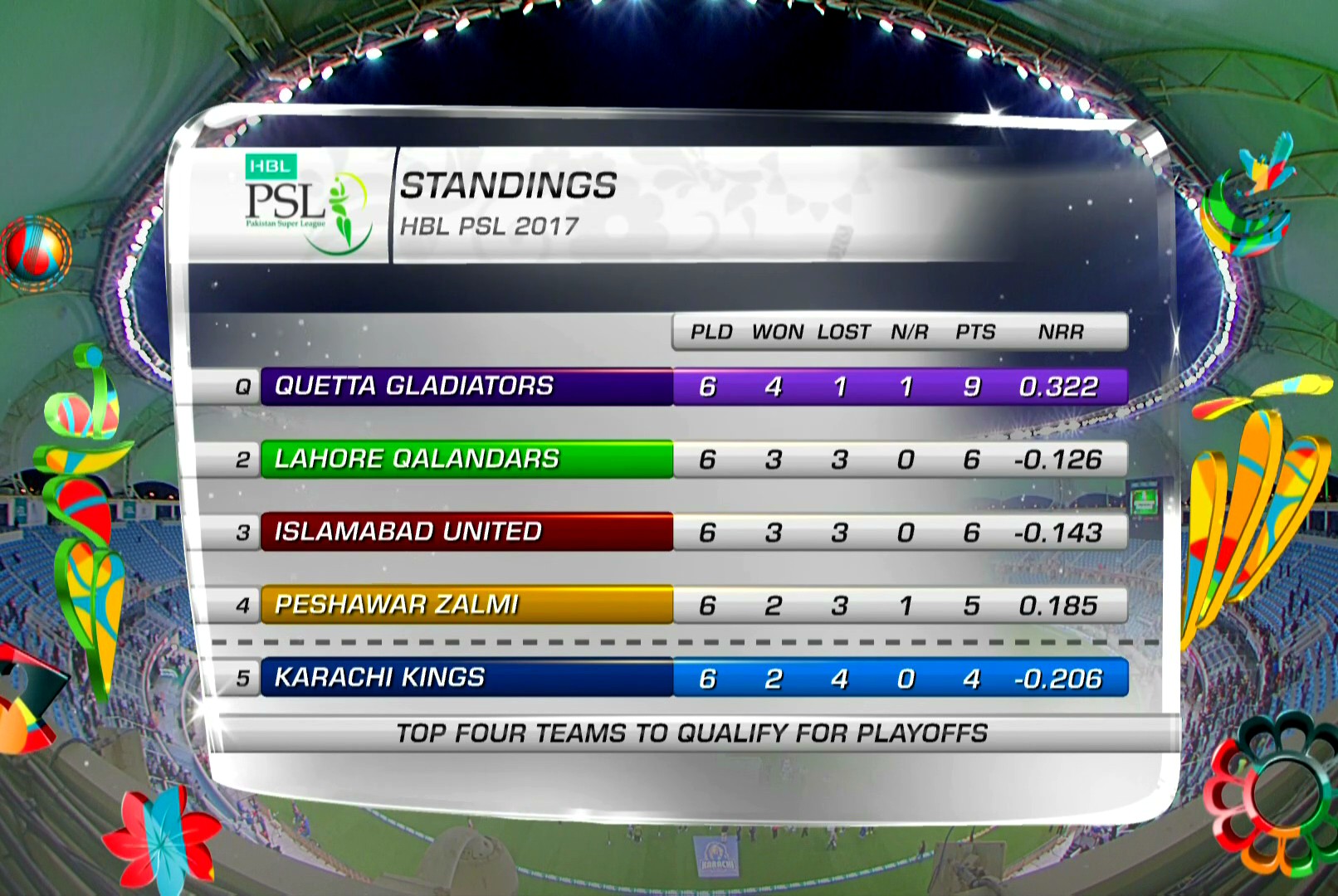