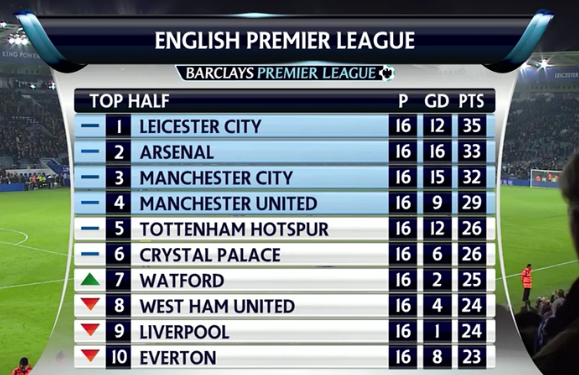 LEICESTER: Sublime goals from Jamie Vardy and Riyad Mahrez sent Leicester City back to the Premier League summit after a deserved 2-1 win on Monday over lacklustre Chelsea whose march to the title last season seems a distant memory.

Algeria international Mahrez curled in a stunning second from the edge of the area three minutes into the second half to put Leicester, continuing a remarkable turnaround after escaping relegation last season, on 35 points, two clear of Arsenal.

Substitute Loic Remy gave the visitors hope with a close-range headed goal 13 minutes from time to set up a tense finish but the hosts held out to leave Chelsea mired in 16th place on 15 points from 16 games — one point above the relegation zone.

“We played against the champions but we want to make a fantastic match for our fans because they believe, they are dreaming,” said Leicester manager Claudio Ranieri, savouring victory against his former side.

“It is good if they (the fans) continue to dream but for us it was important to make a great performance with a fantastic spirit.

“Also tactically, I am very satisfied.

“We concentrated for 95 minutes against the champions. That is not easy.”

“They deserved to win because they were better than us during a longer period of time,” he said.

“They were the best team for an hour.”

Victory was extra sweet for Ranieri who was sacked by Chelsea in 2004, a year after Russian billionaire Roman Abramovich took ownership of the London club.

Ranieri had led Chelsea to their highest league placing for 49 years and their first Champions League semi-final, which they lost to AS Monaco, but his reward was the sack.

He was replaced by Jose Mourinho whose second spell in charge of Chelsea has come increasingly under the spotlight.

They have lost nine of their opening 16 top-flight games for the first time since 1978-79, a season in which they were relegated.