Addressing a press conference here on Tuesday, PHF president retired Brig Khalid Sajjad Khokhar and secretary Shahbaz Ahmed Senior said that the federation will organise the league on the pattern of Pakistan Super League (PSL) which was staged in February this year by the Pakistan Cricket Board in the UAE.

They, however, said the PHF will make its utmost efforts to stage the league in Pakistan instead of a neutral venue.

“We have also been given a go ahead by the security agencies for holding this mega event in Pakistan,” said Khokhar and added that five teams will participate in the event.

He, however, added that in case of security challenges, the PHF will hold the event outside the country.

Speaking on the occasion, Secretary PHF Shahbaz Senior said that five teams which will be announced at later stages will participate in the event. He said that each team can have four foreign players.

Later on, while speaking to Dawn, Shahbaz said that PHF has decided to outsource the league to private advertisers.

“We are hopeful, this event will give a new lease of life to our hockey as it will be helpful for expanding the pool of our players,” he said.

When asked about the exact period of the event, he said tentatively the three-week event has been planned for either the last week of October or during the beginning of October.

“Our players will get handsome amount from this league, it will be a great success for giving new life to our hockey and attract more youngsters towards this national game,” he said.

To query, he said that PHF will seek FIH’s guidance to make this inaugural league a big success.

“I’m hopeful that international players from Holland, Germany and other European countries will participate in this mega event,” he said.

Khokhar elaborated on how the federation will focus on the revival of the game.

“We have several plans to uplift the standards of hockey at the grass roots level,” he said and added that special attention will be paid to school, college and club hockey.

“I have submitted a complete five-year plan at the prime minister office for approval and hope it will get the nod of prime minister who has been very kind to PHF,” he said.

“Under this plan, infrastructure that include new grounds and academics will be established to provide maximum chances to youngsters in the country.”

Talking about the upcoming Asia Cup and the Asian Champions Trophy, the PHF boss said that they are taking these two events very seriously and the national team will make full preparations to participate in them.

Khokar further said that currently PHF has around 130 players on its panel who are being provided a fair chance of grooming.

“I am also making efforts to get our many players adjusted in various government organizations,” he said. 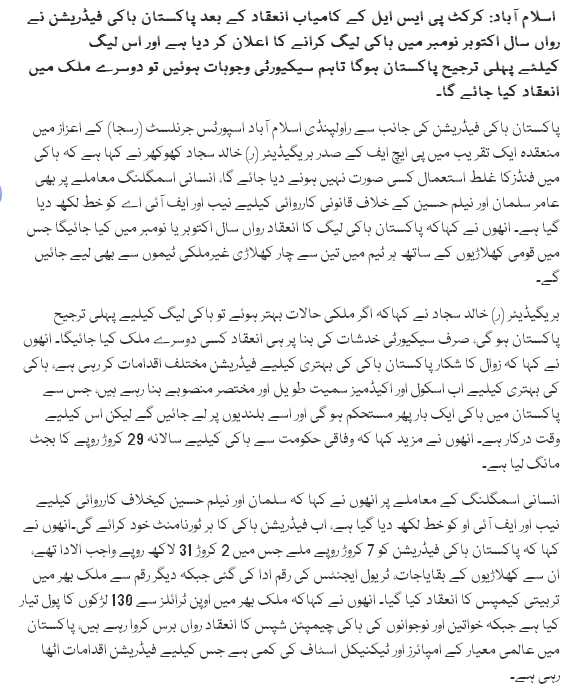