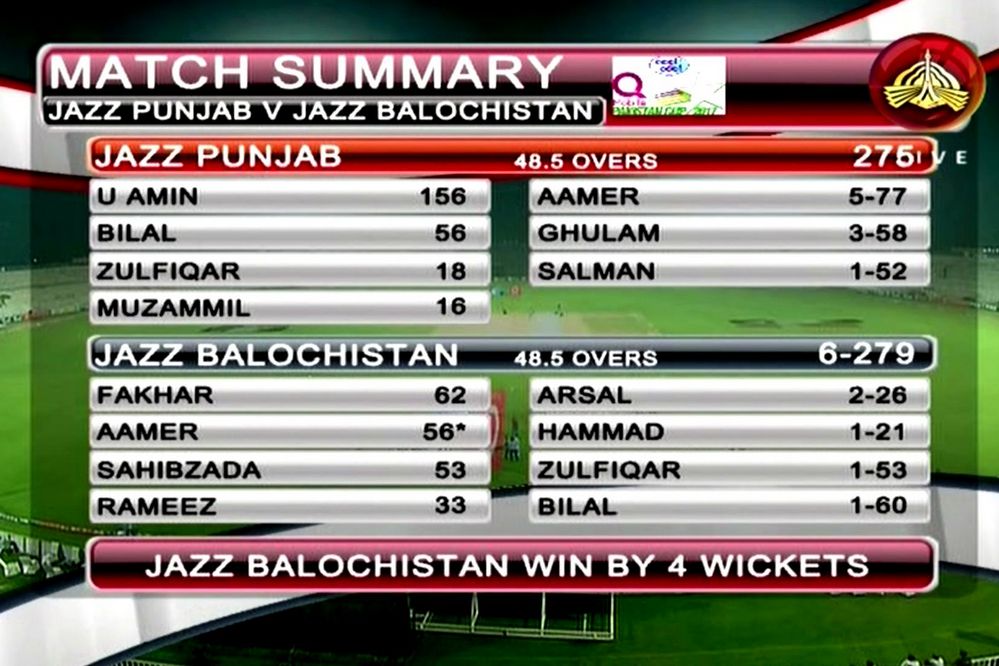 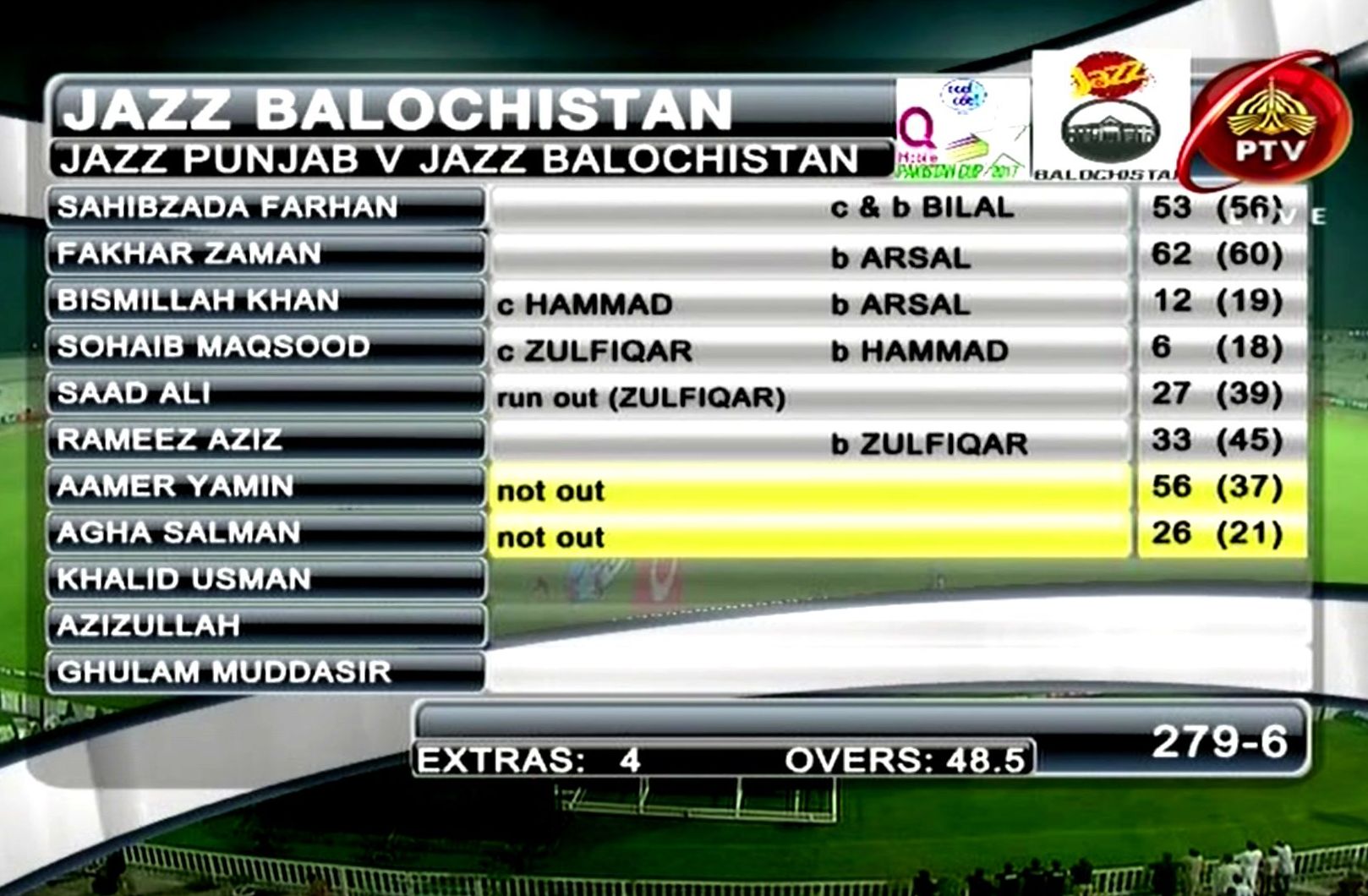 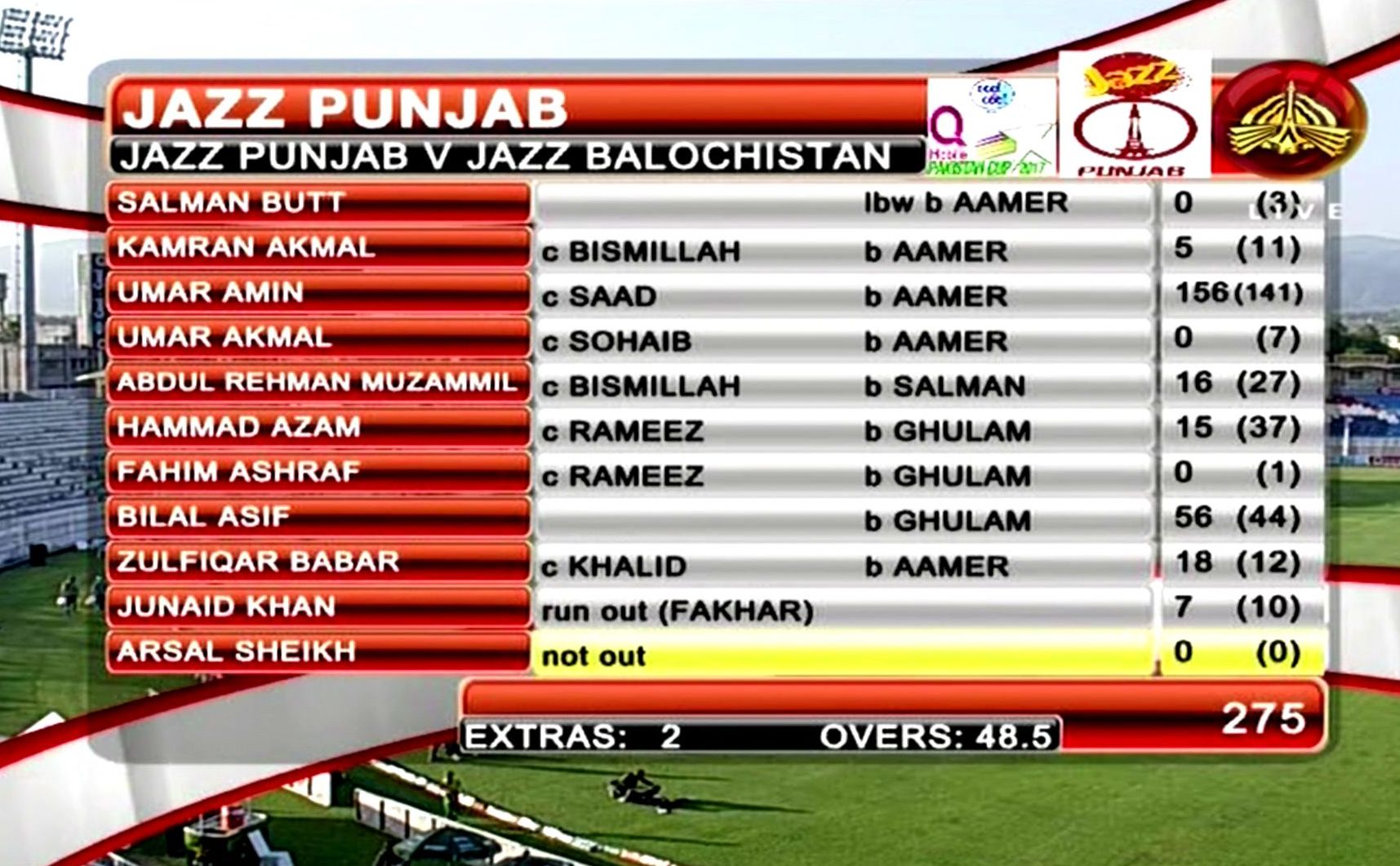 All-round performance by Aamer Yameen helped Balochistan beat Punjab by 4 wickets in the inaugural match of the Pakistan Cup 2017 played here at Pindi Stadium on Sunday.

Aamer was hero for Balochistan both with leather and willow, as the youngster first picked 5 wickets and then scored match-winning unbeaten 56 to give Balochistan perfect start to the tournament. Man of the match Aamer, who shared the prize with Umer Amin, hit 7 boundaries in his sensational knock.

Earlier, Balochistan got off to flying start as openers captain Fakhar Zaman and Sahibzada gave 88-run stand. Sahibzada was first to go after scoring 53 hitting 7 fours and two sixes. Balochistan lost their second wicket at 116 and at one stage, they were 139-4 but sensible batting by skipper Fakhar, who top-scored with 62, steadied Balochistan innings.

On the other hand, Umar Akmal failed to handle the captaincy pressure and his pathetic decisions cost Punjab dearly, as first he failed to rotate his bowlers, as top wicket-taker Arsal Shakih, who took 2-26, was only utilised for 5 overs and Hammad Azam, who gave away only 21 runs in 5 overs, was also not utilized properly. Junaid Khan remained the most expensive bowler, as he gave away 65 runs without taking a wicket. Umar Akmal needs to pick his game and captaincy, if Punjab want to make further progress in the tournament. Federal Area will take on KP in the second match of the event.

Earlier, Punjab skipper Umar Akmal won the toss and opted to bat first on a perfect hot bright and sunny day. His decision failed to bring desired results, as Punjab got off to worst possible start. Seasoned campaigner Salman Butt lost his wicket without troubling the scorers and it was 19-2 when Kamran Akmal also gifted his wicket. Punjab were in dire strides and coach Sabih Azhar was looking in disbelief as skipper Umar Akmal also got out without opening his account. At this crucial time, local boy Umer Amin came to rescue Punjab innings and played swashbuckling knock of 156 off 141 balls to make his team’s total pretty decent as they were all out for 275 in 48.5 overs. Bilal Asif gathered 56 off 45 balls with the help of 5 fours and 2 sixes.

Aamer Yameen’s all-round performance once again proved his worth and out question mark on PCB selection committee, who completely ignored the youngster in all three formats of the game for the West Indian tour. Chief selector Inzamam-ul-Haq must look beyond certain players and should give chances to bright prospects like Aamer Yameen.

It was highly disappointing crowd on the first day of the mega event. Rawalpindi crowd was mainly unaware of the fact that such a major cricket national championship is going to be held in Rawalpindi. The PCB kept things under blanket before finally announcing the Pakistan Cup hardly a day prior to start of the championship. Chairman tournament organising committee Shakil Shaikh, who is also PCB Governing Board member and president of Islamabad Cricket Association was very active and kept on visiting different parts of the ground and also visited media centre. He also assured media men that the crowd would come in numbers and they would be provided smooth passage to the respective areas.