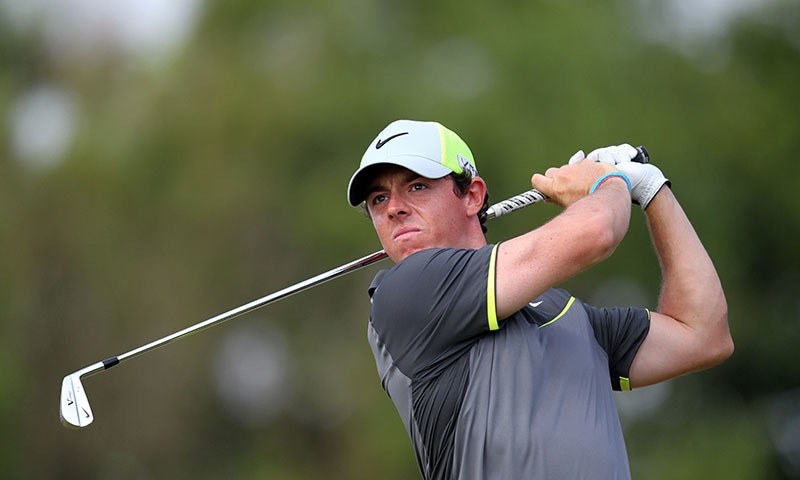 Northern Ireland’s Rory McIlroy watches his shot from the 8th tee during his second round of the 2014 British Open Golf Championship at Royal Liverpool Golf Course in Hoylake. — AFP/File

PARIS:(AFP) It seems like only yesterday that Rory McIlroy was the hunter. Next week when he tees off in what will be his seventh Masters he is quite clearly the hunted.

The 25-year-old world number one is aiming to win his third straight major title and in so doing become just the sixth player in history to complete a career Grand Slam of the sports’ four crown jewels.

To achieve that feat and enter the realms of golfing greatness the Northern Irishman will have to vanquish a rapidly-evolving cast of characters.

When he first teed off in earnest at Augusta National in 2009, Tiger Woods still reigned supreme, Phil Mickelson was in his prime and Ernie Els loomed large.

The youthful McIlroy had them all in his sights. Six years on, much has changed.

Woods may well be in terminal decline at 39, riddled by injuries and loss of form. He is ranked 104th in the world.

Mickelson is also struggling, the 44-year-old missing cuts and slumping to 21st in the rankings. Els at 45 looks like a spent force and is down at 82nd place.

But, as ever, from out of the ashes a new generation of top players is emerging. Leading the way are three Americans — all younger than McIlroy.

Jordan Spieth is only 21 but he has already won twice on the US PGA Tour, most recently at the Valspar Championship in February.

Fellow Texan Patrick Reed at 24 has won four times, while Brooks Koepka from Florida grabbed his breakthrough win in February a month ahead of his 25th birthday.

What the trio have in common is they all possess loads of talent and the burning desire to match up to and eventually unseat McIlroy from the pinnacle of the game.

Spieth, who some believe is the finest young talent to emerge in the United States since Woods back in the late 1990s, is in no doubt over what he needs to do.

“Right now what I’m really focused on is Rory McIlroy is number one in the world,” he said after winning the Valspar win.

“That’s who everyone is trying to chase. Our ultimate goal is to eventually be the best in the world and this is a great, great stepping stone.

“Going into the four majors of the year to have closed one out in this kind of fashion is going to give me a lot of confidence.”

Reed also says he would relish the opportunity of being in contention with McIlroy going down the back nine on Sunday at Augusta National.

“At the end of the day, come Sunday, if I do everything well, I should have a chance,” he said. “You know, if I don’t, then that means I have to figure something else out and I need to work on something else.

“I would love to get up to that position where I’m a true rival against him (McIlroy) or battling it out one versus two, but I’ve got some ways to go. I think I’m 15th now so I still have a couple more spots to move up.”

So the joint pressures of gaining golfing immortality and being the player everyone wants to beat are sure to weigh heavily on McIlroy’s shoulders at Augusta.

He has already felt the full agony of a Masters meltdown in 2011 when he led by four strokes going into the final round but collapsed down the back nine to a woeful 80 that left him in a tie for 15th.

He believes though that ultimately he gained more than he lost on that occasion.

“It was a huge learning curve for me and I needed it, and thankfully I have been able to move on to bigger and better things,” he told the BBC in an interview.

“Looking back on what happened in 2011, it doesn’t seem as bad when you have four majors on your mantelpiece.”

McIlroy looks destined to add to his tally of major titles with the likelihood that he has 20 more years of top golf ahead of him. But he admits that to end his career without having at least once donned a Masters green jacket would be unthinkable.

“If I was to look back as a 60-year-old at my career and had not won a green jacket I would be very disappointed,” he added.

“It is the only one left and it is a course I feel I can do well at. I feel I could win multiple times, but getting that first one is the most important thing.

“Winning all four majors means you are a complete player. I can achieve something special.”

South African Els for one believes McIlroy can win at least four green jackets. “But he’s got to do this first one and then the other ones will be easier. This one is going to be quite big,” he told the BBC.