MADRID: Treble-chasing Barcelona secured their 23rd La Liga title with a game to spare when Lionel Messi struck to secure a 1-0 win at dethroned champions Atletico Madrid on Sunday.

Exactly a year to the day since Atletico won the league in a title decider at Barca’s Nou Camp, the Catalans exacted some measure of revenge to seal the first of a potential treble of trophies this season.

Messi slotted in the decisive goal in the 65th minute after working a sublime one-two passing combination with Pedro Rodriguez, who started for the injured Luis Suarez.

It had been a cagey game but the talent of the Argentine shone through again to break the deadlock and help Luis Enrique to his first piece of silverware at the helm of Barca.

Barca’s victory at the home of last season’s champions saw them win their fifth league crown in seven years and seventh in the last 11 years as they re-established themselves as the dominant Spanish club of the past decade.

With one game left, they have an unassailable four-point lead over second-placed Real Madrid, who won 4-1 at Espanyol with Cristiano Ronaldo scoring a hat trick.

The Catalan side have dominated the list of La Liga titles in recent years and remain on course to repeat their trophy treble of 2009, a year after not winning a major title.

Luis Enrique’s side are through to the Champions League final on June 6 to face Juventus and will play Athletic Bilbao in the Copa del Rey showpiece on May 30.

“We’re very happy of this glorious era with so many titles,” said Barca midfielder Sergio Busquets. “Last year we weren’t up to the challenge to win any competitions, but this year we are on a good path and this is only the first. This winning era hadn’t ended.

“What Pep Guardiola started with Messi, Xavi, Iniesta is still going. We have one title now and are two more wins away from a historic season.” 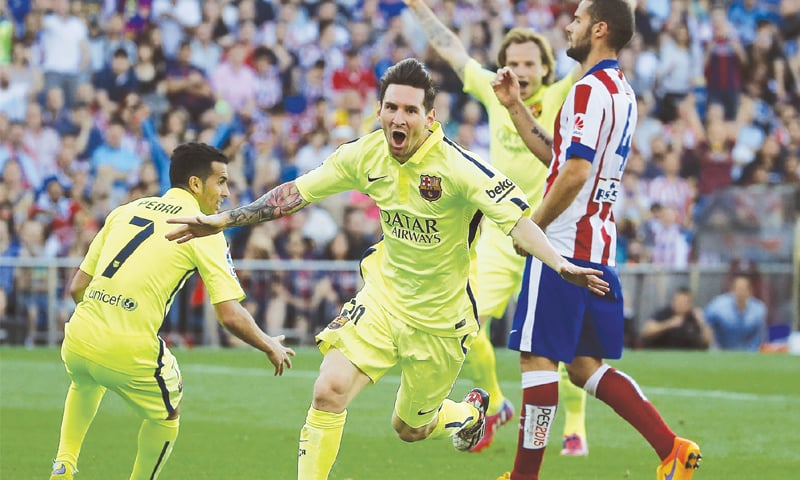 Atletico were left in third place and need just a point on the final day to secure their place in the group stages of the Champions League next season by finishing third as Valencia could only manage a 1-1 draw at home to Celta Vigo.

With Suarez out nursing a left hamstring injury, Messi moved into the centre of Barca’s attack and had four shots in the first 20 minutes.

He first sent two efforts into the hands of goalkeeper Jan Oblak before firing high and heading a ball off the arm of Juanfran Torres in the area, which went unpunished by the referee.

Messi next clipped the crossbar with a free kick in the 34th before Dani Alves’ dipping strike from long range forced Oblak to tap it over his bar just before halftime.

Barca kept up the pressure until Messi and Pedro finally broke down Atletico’s defence, when the Argentina forward used his left boot to fire the ball inside the post for his 41st league goal of the season and his 54th in as many games in all competitions.

BARCELONA: Real Madrid’s Cristiano Ronaldo (2nd R) vies for the ball with Espanyol’s defenders during their La Liga match at the Cornella-El Prat Stadium on Sunday.—AP

Ronaldo’s goals— he leads the league with 45— were once again not enough for Real to better Messi’s Barca, and Carlo Ancelotti’s team will end the season without a major title.

The Portuguese struck his 30th hat-trick for Real as Los Blancos bounced back from their Champions League elimination at the hands of Juventus, putting them ahead before an error from Keylor Navas allowed Christian Stuani to level for Espanyol.

However, Marcelo put Carlo Ancelotti’s men back in front before Ronaldo struck twice more in the final eight minutes.

At the bottom Deportivo la Coruna and Granada moved out of the relegation zone with victories over Levante and Real Sociedad respectively.

They now lead Eibar and Almeria by two points with all four fighting for survival on the final day of the season next Saturday.