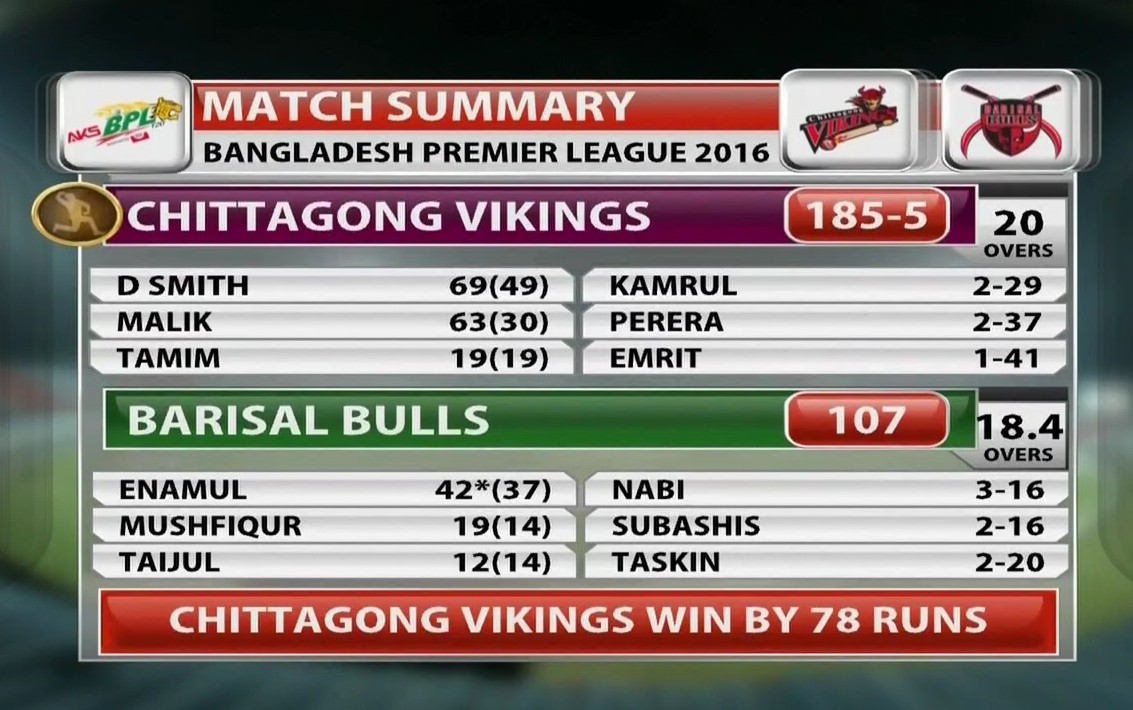 Chittagong Vikings utilised home advantage to the maximum, registering their third consecutive win when they beat Barisal Bulls comprehensively by 78 runs in the Bangladesh Premier League Twenty20 2016-17 season at Zahur Ahmed Chowdhury Stadium in the port city on Tuesday.

Taking first guard, Chittagong started off on a positive note with Dwayne Smith making use of the power-play overs to great affect. However, skipper Tamim Iqbal departed after scoring a run-a-ball off paceman Kamrul Islam Rabbi.

Anamul Haque (11) also perished cheaply but all-rounder Shoaib Malik, along with Smith, punished the Barisal bowlers, flaying them all across the ground. Barisal also displayed some horrible display of catching and fielding, which helped the batting side to exploit the situation in their favour.

Smith, who was dropped a couple of times, ended up scoring 69 off 49 balls with six fours and three sixes while Malik blasted a quick-fire 63 off just 30 balls with the help of nine fours and two sixes.

Chittagong shifted their gear in the latter stages of the innings where they added 94 runs in the last eight overs to post a huge total.

In reply, Barisal kept losing wickets right from the word go and at one stage were reeling on 39/7. Debutant Enamul Haque offered some resistance, top-scoring with a 37-ball 42, but he only narrowed the margin of defeat at the end.

Mohammad Nabi once again made an impact with the leather, picking up three wickets while fast bowler Taskin Ahmed took two for Chittagong.