BERLIN: Luis Suarez and Neymar scored second half goals to give Barcelona a 3-1 Champions League final victory over Juventus on Saturday and make the Spaniards the first team to twice win the European treble.

Luis Enrique capped his first season as Barcelona’s head coach by matching Pep Guardiola’s feat from the 2008/09 season when the Catalans captured the European, Spanish league and cup titles.

An early goal by Barca’s Ivan Rakitic was cancelled out by Juventus’ ex-Real Madrid striker Alvaro Morata, who equalised on 55 minutes.

But Suarez put the game beyond the Italian champions with a 68th minute strike off a rebound at Berlin’s Olympic Stadium. Neymar added the third with the last kick of the game in the 97th minute.

Juventus suffered the indignation of becoming the first team to lose six European Cup finals, 30 years after winning the trophy for the first time amidst the tragedy of the Heysel Stadium disaster. 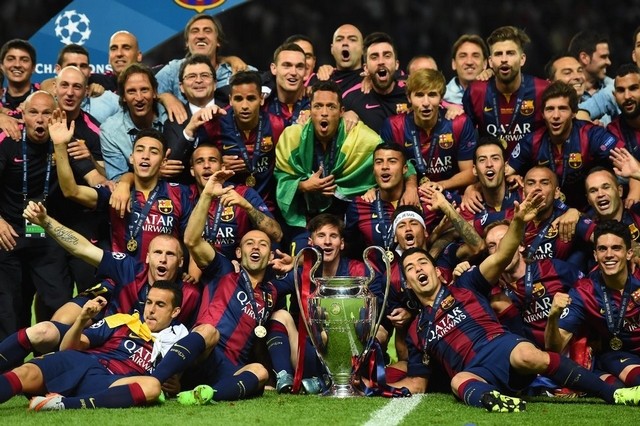 This was the fifth time Barcelona have been crowned European champions and it is their fourth Champions League title in the last decade after their 2006, 2009 and 2011 triumphs.

Neymar fed his captain Andres Iniesta from the left wing and the Spain international squared for Rakitic to drill home from close-range past Juventus captain Gianluigi Buffon.

Juve came back into the game midway through the first-half, but Suarez forced Buffon, who failed to claim a winners’ medal at the 12th attempt, into another save as it finished 1-0 at the break.

Suarez swoops
The Spaniards picked up where they left off in the second half when Rakitic fed Suarez, who forced Buffon into a diving save with 48 minutes gone before firing over moments later.

Messi, who showed glimpses of his brilliance with a first-half darting run through the Juve defence, then fired wide after exchanging two quick passes in the build-up move. 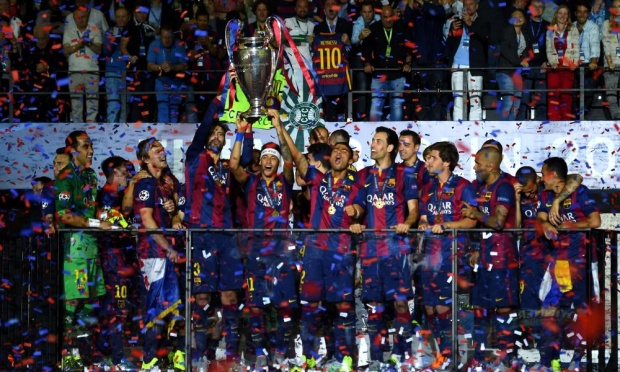 Juve got the equaliser they had threatened when defender Stephan Lichtsteiner’s cross found Carlos Tevez, whose shot was parried by Barca goalkeeper Marc-Andre ter Stegen, only for Morata to rifle home the loose ball on 55 minutes.

It was the ex-Real striker’s first goal against Barcelona despite four years at the Bernabeu having left Madrid last year.

The goal breathed life back into Juve’s ambitions, but it was a touch of Messi magic which led to the decisive goal.

The Argentina international attacked the Juve defence with a mazy run and although Buffon blocked his shot, Suarez fired home the rebound on 68 minutes.

Neymar looked to have headed Barca’s third just moments later, but Turkish referee Cuneyt Cakir spotted the ball hit his arm on its way into the Juve goal.

Xavi Hernandez came on for his final game in the Barca shirt in the dyings stages as he made history with a record 151st Champions League appearance before joining Qatari side Al Sadd next season.

The scene was set for Neymar to cap his first Champions League final with Barcelona’s third just before the final whistle. –AFP