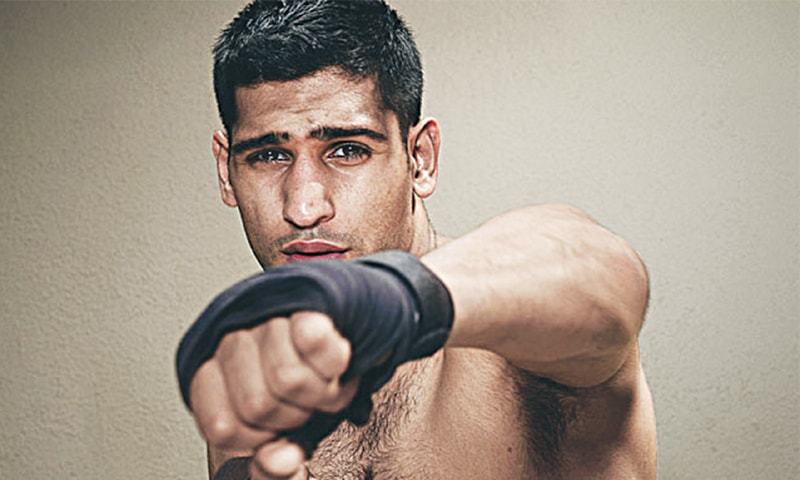 Amir Khan hopes a win over Algieri will lead him to bigger fights.

LONDON:(AFP) British boxer Amir Khan announced on Thursday that he is set to fight former light-welterweight world titlist Chris Algieri on May 30.

Amir had come under pressure to take on British rival and IBF welterweight champion Kell Brook in June.

But the former Olympic silver medallist, who was also linked with bouts against Adrien Broner and Keith Thurman, said he was already deep in negotiations to fight somebody else.

And on his wife’s YouTube channel Amir announced: “The next opponent will be Chris Algieri. I will be taking that fight at 147lbs (the welterweight limit).”

The fight has yet to be rubber-stamped, but Amir added: “I’m looking forward to getting this fight announced officially by my manager and advisor Al Haymon.”

Algieri’s only defeat in his 21-fight professional career came in his last bout against Filipino superstar Manny Pacquiao, who faces Floyd Mayweather in a mega-fight on May 2.

Amir believes his American foe is a credible opponent as he wrested the WBO light-welterweight title off the much feared Ruslan Provodnikov in June 2014 — albeit by highly controversial split-decision.

The 28-year-old hopes to fight in Algieri’s home city of New York, with Khan’s only previous outing there an 11th-round stoppage of Paulie Malignaggi at Madison Square Garden in May 2010.

This time, though, Amir wants the non-title bout at the Barclays Center as he said: “We’re looking at fighting in New York, I think New York’s a great venue for me.”

Amir has made no secret of his desire to chase lucrative showdowns against Mayweather or Pacquiao and is confident a win over Algieri can lead him to that.

“Hopefully this can lead me on to the bigger fights in the future, which is what I’m looking at,” he added.