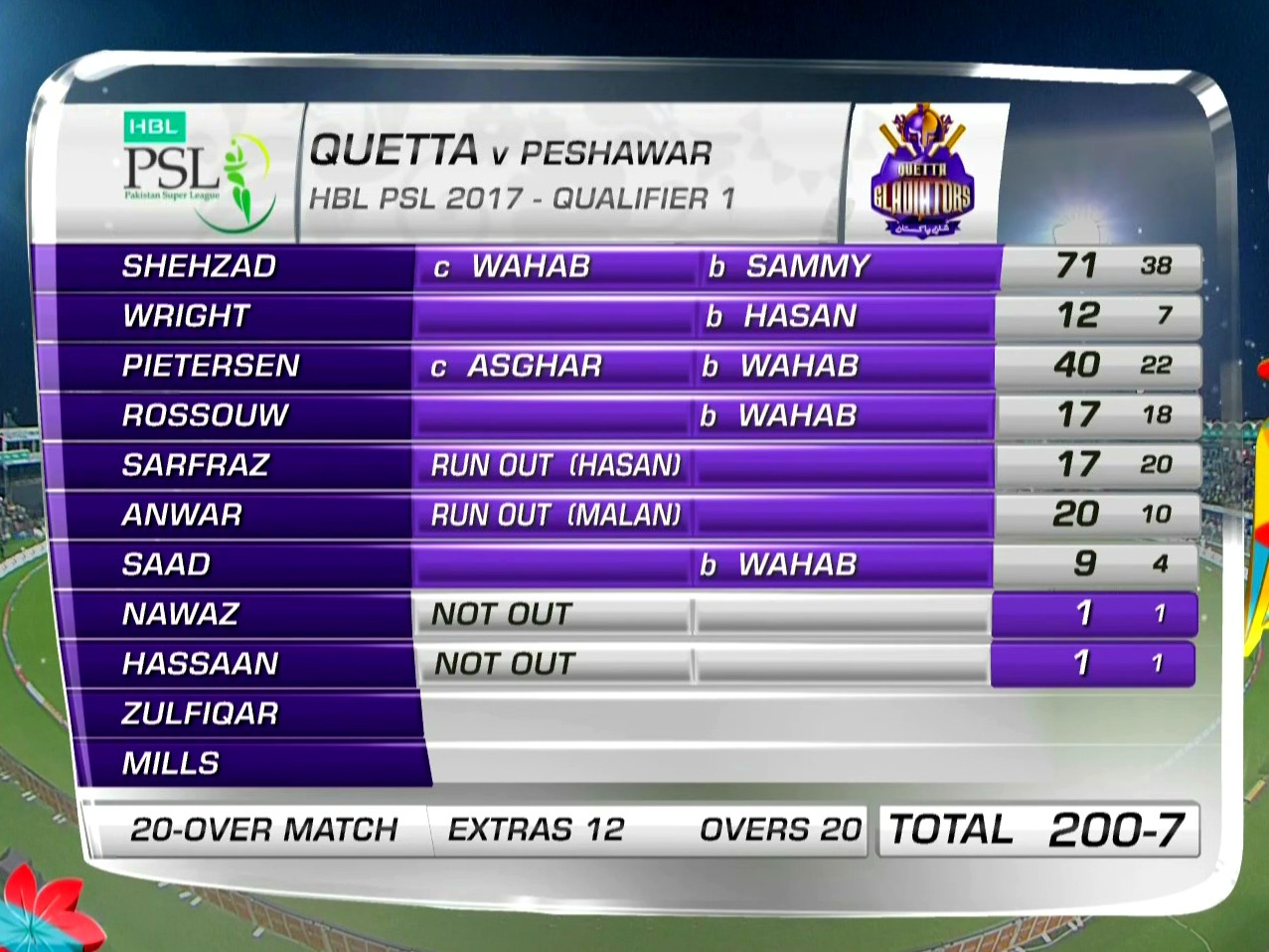 Gladiators made an impressive 200 runs at the end of their innings with Zalmi failing to control the runaway run rate at the start of the game. in the first playoff match in the Pakistan Super League.

Even though the Gladiators lost seven wickets, including Shehzad and Pietersen, the run rate kept steady at nearly 10 per over. Gladiators had starting hitting big from the start and maintained pressure on Zalmi’s bowling attack.

Gladiators were in the driving seat after damaging knocks by Ahmad Shehzad and Kevin Pietersen in their match against Peshawar Zalmi in the first playoff match in the Pakistan Super League.

Pietersen knock of 40 further cemented Gladiators control with Zalmi’s bowlers failing to pick up regular wickets or slow down the run rate. Gladiators were cruising with a run rate of almost 10 runs per over at the end of the 15th over.

Pietersen was caught by Asghar on a ball by Wahab Riaz.

Gladiators blitzed their way to a score of 121 in the tenth over, helped by Ahmad Shehzad’s quickfire 71 in the first playoff match in the Pakistan Super League.

Shehzad punished the bowlers at a regular basis and hit periodic boundaries, which included seven fours and four sixes, till he was finally stopped by Sammy who claimed his wicket. Kevin Pietersen remained steady on the crease and was joined by Rossouw after Shehzad’s departure.

The first wicket to fall for the Gladiators was Wright, who scored 12 off seven balls and managed to hit two boundaries before returning to the pavilion. Kevin Pietersen joined Shahzad on on the crease after the fall of the first wicket.

Peshawar Zalmi won the toss and decided to bowl first against Quetta Gladiators.

Luke Wright and Ahmad Shahzad have opened the innings for Gladiators.

The pitch report revealed that the average score batting first is 165-170 runs.

“Looks like a very good wicket. Hopefully we can restrict them to a good total like we have done before,” said Zalmi skipper Sammy.